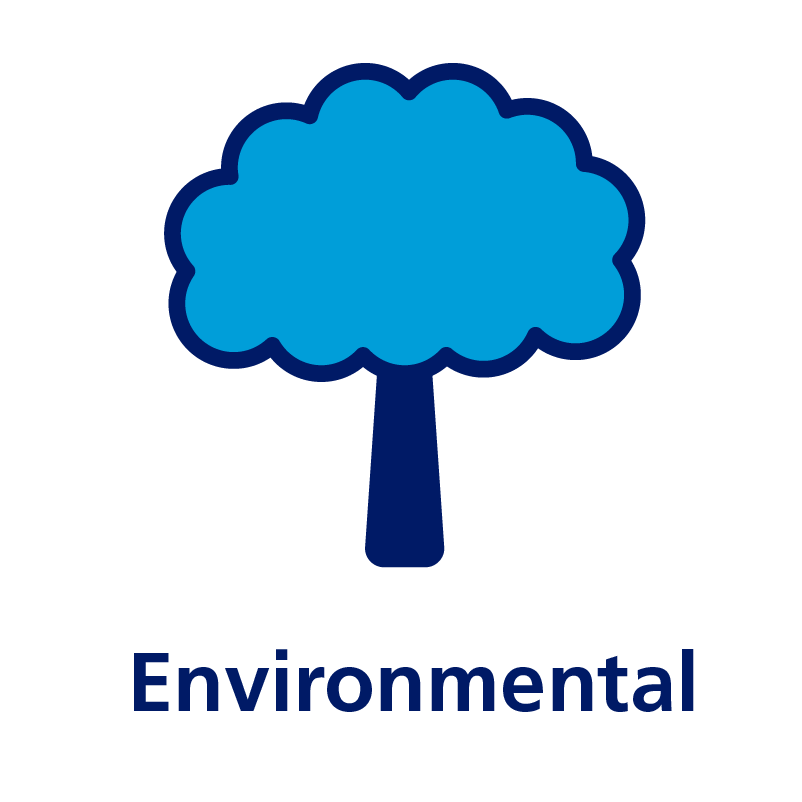 Many aspects of our environment can contribute to the development of obesity, including exposure to oversized food portions, lack of physical activity, which can occur due to high amounts of screen usage and easy access to unhealthy food.1 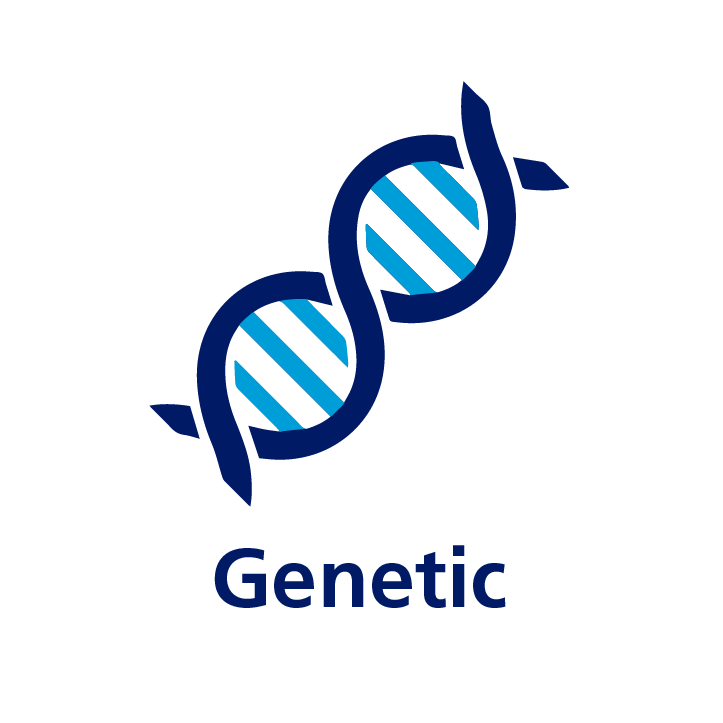 Some people are genetically predisposed to developing obesity, depending on their family history.1 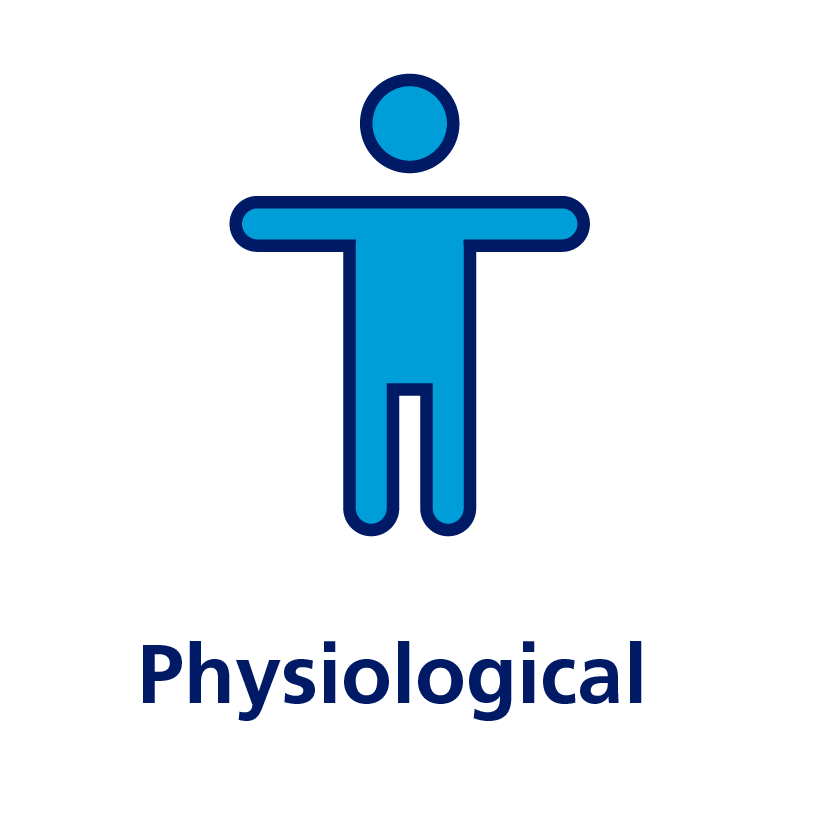 Broadly speaking, obesity can develop due to an imbalance of energy in versus energy out, with excess energy being stored as adipose (fat) tissue.1 However, energy balance is a complex mechanism centrally regulated by the brain through neural and endocrine pathways.2 Through these pathways, hormones and neuropeptides help communicate with the gut, the pancreas, and visceral adipose tissue to signal energy homeostasis.3 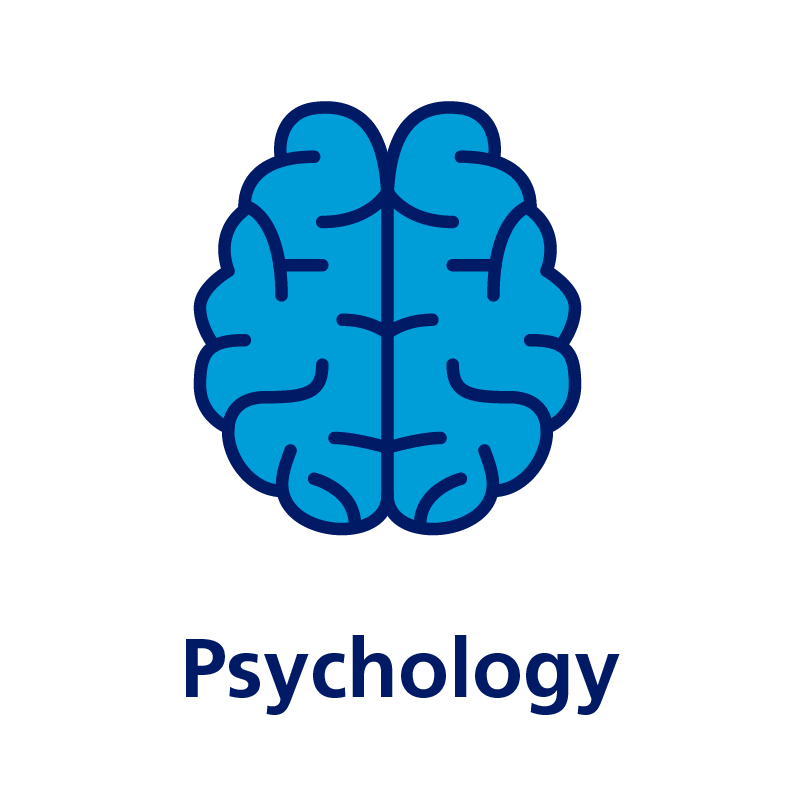 Stress, boredom and psychological disorders are linked to overeating and can contribute to the development of obesity.1,4 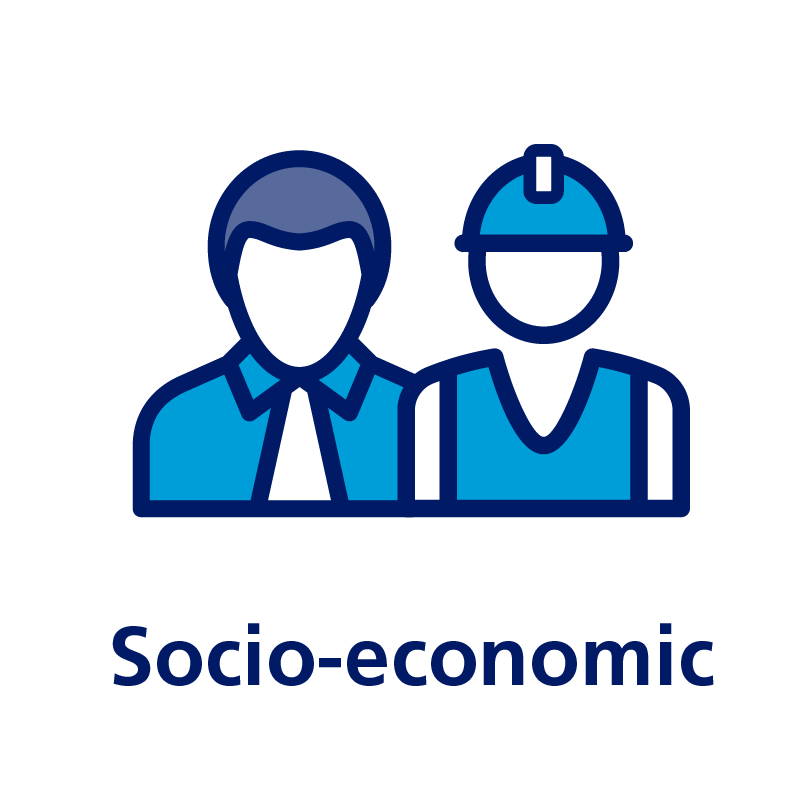 BMI=the weight in kilograms divided by the square of the height in metres (kg/m2).

Is obesity a disease?

"Obesity is a chronic and often progressive condition not unlike diabetes or hypertension."7

It is the official position of The Obesity Society that obesity should be declared a disease.8

"[Obesity] must be viewed as a chronic disorder that essentially requires perpetual care, support, and follow-up."9

"It is important for health care providers to recognize obesity as a disease so preventive measures can be put in place..."10

The World Obesity Federation takes the position that obesity is a chronic, relapsing, progressive disease process and emphasises the need for immediate action and the prevention and control of this global epidemic.11

Obesity is a population problem and should be tackled as such.13

Obesity is one of the most significant contributors to ill health, replacing traditional public health concerns, such as undernutrition and infectious disease.13 An integrated approach, requiring actions from all sectors of society, will be necessary to achieve effective prevention and management of obesity.13

How have global obesity trends changed? 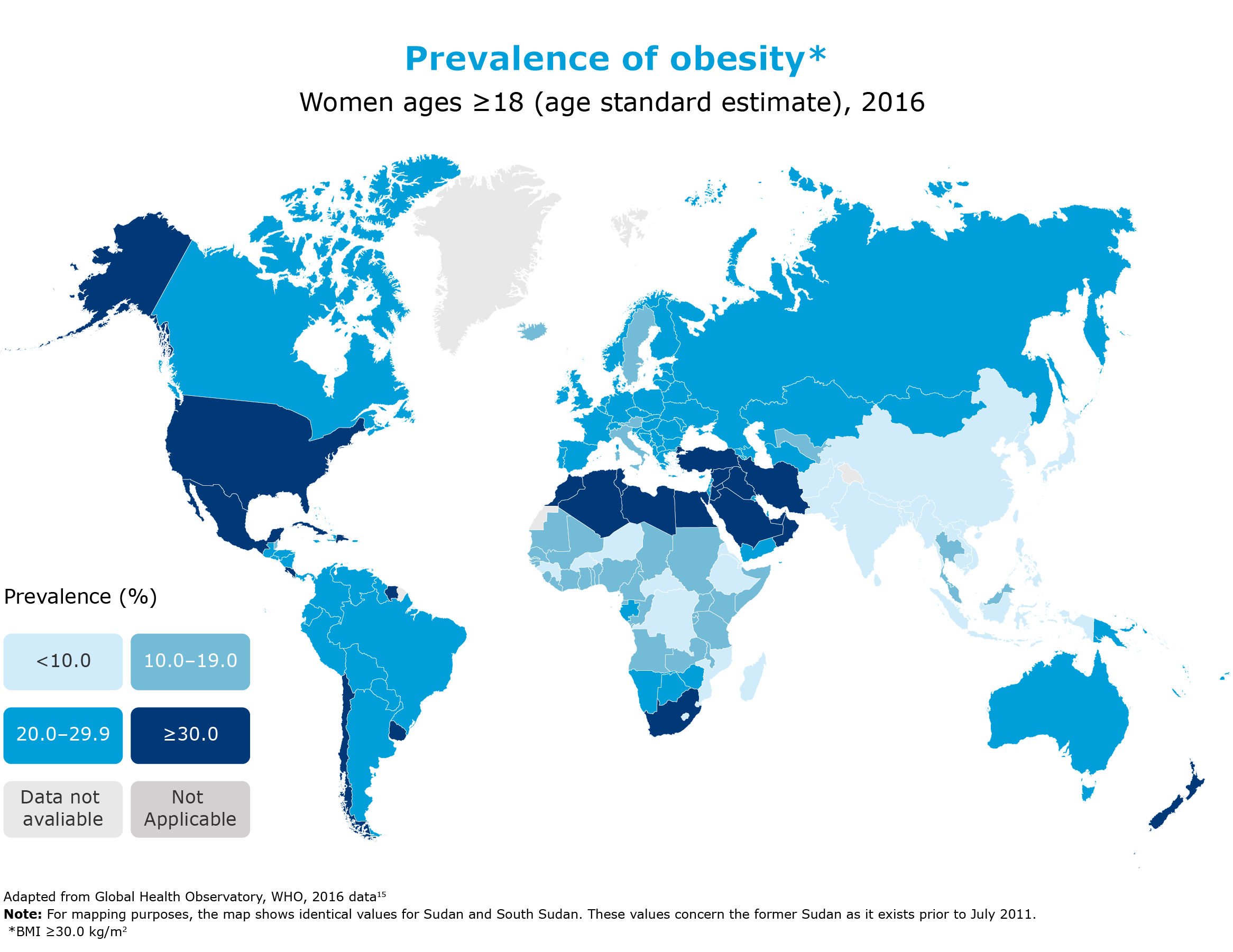 Obesity is highly prevalent in Canada.

Obesity is associated with multiple comorbidities.19

The weight of obesity on Canadians

Compared to a person with overweight, class I obesity is associated with a:20

The obesity cycle—Reciprocal link between obstructive sleep apnea and obesity.24 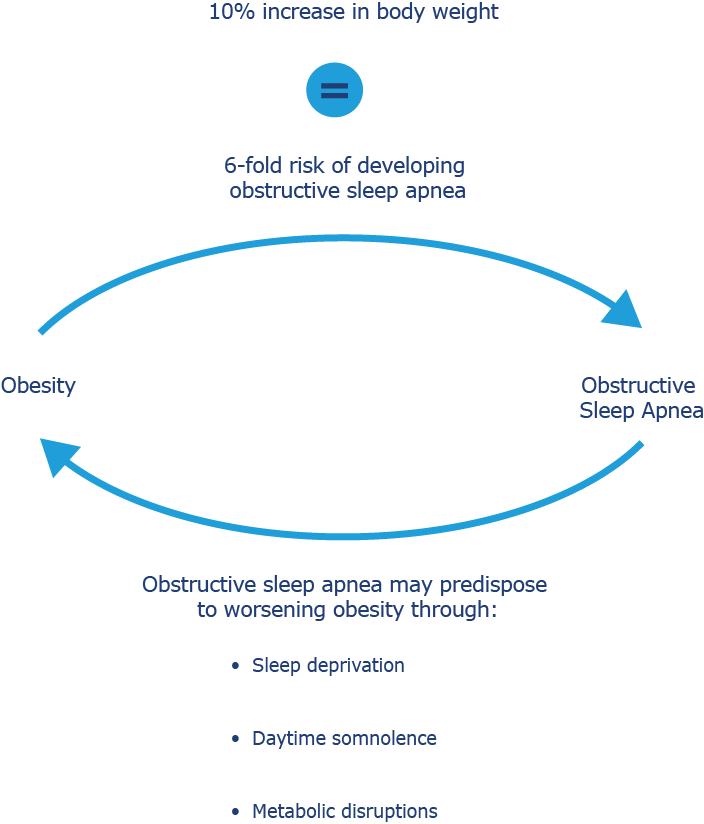 What is the link between obesity and cardiovascular disease?

Globally, cardiovascular disease is the leading cause of mortality in people with obesity.26

The economic weight of obesity in Canada

Conditions associated with obesity have a substantial economic cost. 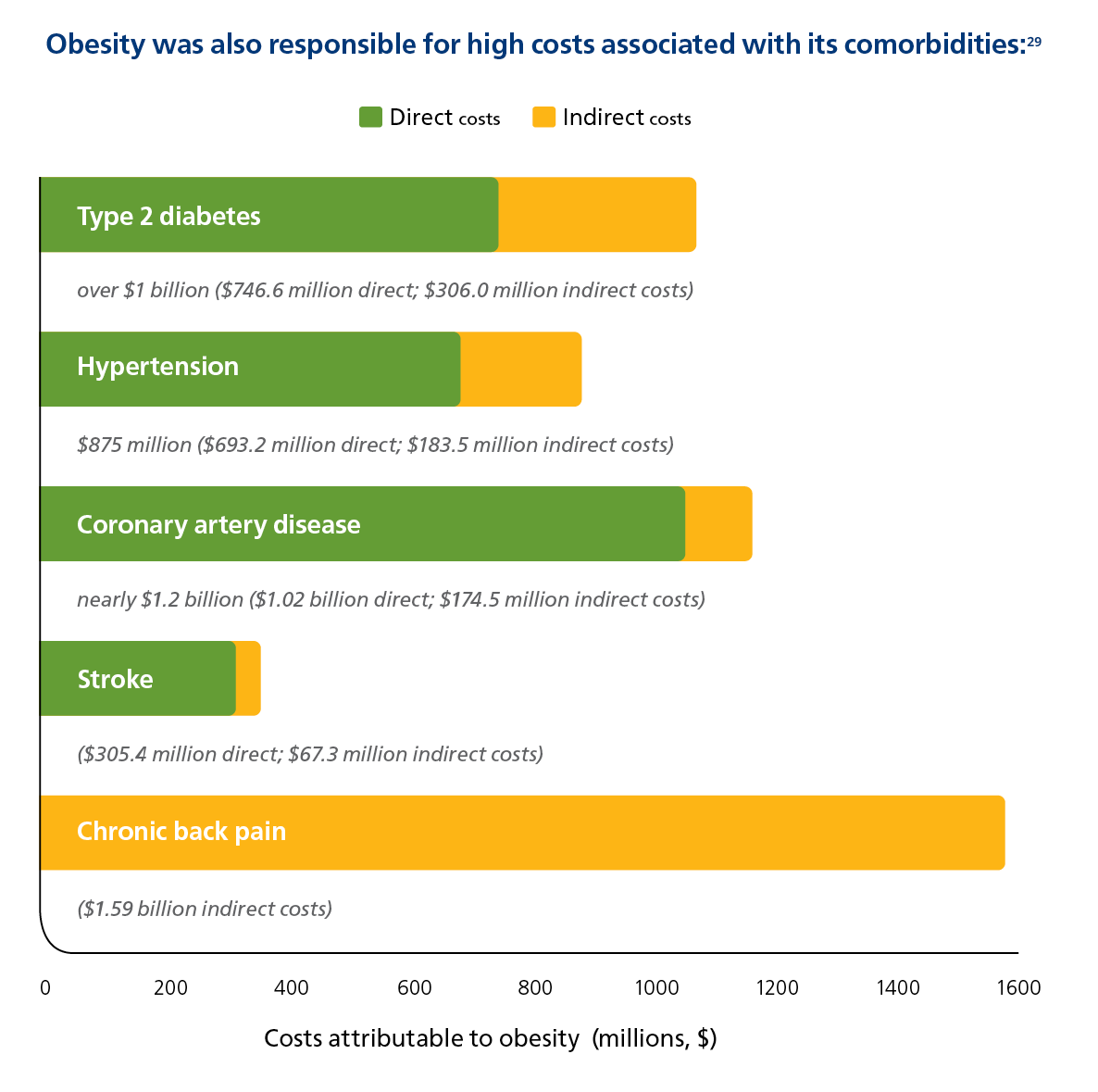 What are the potential benefits of a weight loss of 5–10%?

How does BMI affect risk of mortality?

Several studies have found that the effect of weight stigma on people with obesity may increase vulnerability to depression, low self-esteem, poor body image, maladaptive eating behaviours and exercise avoidance.33

Impact of weight loss on cardiovascular risk factors including A1C%, BP, and triglycerides.34

This data was generated from an observational analysis of 5,145 participants (40.5% male, 37% from ethnic/racial minorities) in the Look AHEAD (Action for Health in Diabetes) study. The study examined the association between the magnitude of weight loss and changes in CV disease risk factors at 1 year. The endpoints measured in this study include weight (kg), SBP (mmHg), DBP (mmHg), glucose, HcA1c (%), HDL cholesterol (mg/dL), LDL cholesterol (mg/dL), triglycerides (mg/dL).

* For change in triglycerides, data are median (interquartile range). The signed-rank test was used to test whether the change from baseline to year 1 was different from 0.

† 3234 nondiabetic persons with elevated fasting and post-load plasma glucose concentrations were randomly assigned to placebo, metformin (850 mg twice daily), or a lifestyle-modification program with the goals of at least a 7 percent weight loss and at least 150 minutes of physical activity per week. The mean age of the participants was 51 years, and the mean body-mass index (the weight in kilograms divided by the square of the height in meters) was 34.0; 68% were women, and 45% were members of minority groups. The primary endpoint in this study was the incidence of diabetes measured with an annual oral glucose-tolerance test or semi-annual fasting plasma glucose test.

‡ This data was generated from a population-based prospective cohort study between July 1989 and January 2000 that included 690 randomly selected employed Wisconsin residents (mean age at baseline, 46 years; 56% male). The participants were evaluated twice at 4-year intervals for sleep-disordered breathing (SDB). The endpoints for this study were the percentage change in the apnea-hypopnea index (AHI; apnea events+hypopnea events per hour of sleep) and odds of developing moderate-to-severe SDB (defined by an AHI≥15 events per hour of sleep), with respect to change in weight.

The higher the BMI, the greater the risk of impaired physical functioning, which may include limitations in mobility activities such as walking and dressing.37 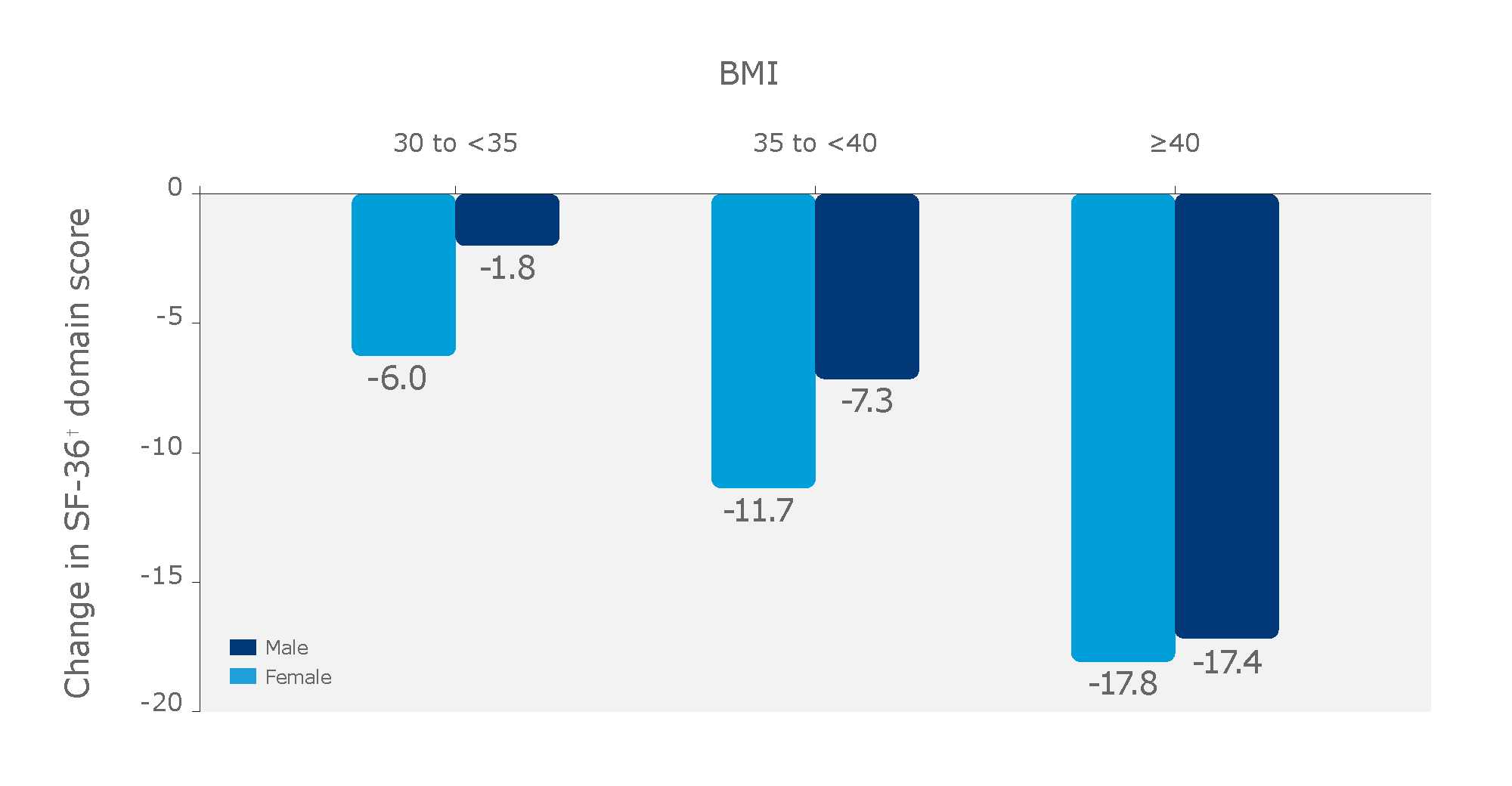 † The SF-36 is comprised of specific domain scores, including physical functioning.

Why is it hard to lose weight and keep it off?

Weight loss in people living with obesity has been shown to cause changes in appetite hormones that increase hunger and the desire to eat for at least 1 year.39

Multiple hormones, such as ghrelin, GLP-1, and leptin, play an important role in regulating appetite.2

Want to learn more about the science behind obesity? View our Rethinking Obesity video.

Maintaining weight loss achieved through diet can be challenging.43

A review of 14 long-term studies showed that participants regained weight after weight loss achieved by dieting.43

Study participants’ weight and diet statuses were assessed at baseline; their weight was then monitored for up to seven years after the diet ended. These data are from a review of 14 diet studies with long-term follow-ups.43

“…the high rate of relapse among people with obesity who have lost weight has a strong physiological basis and is not simply the result of the voluntary resumption of old habits."39

Behavioural interventions including diet, exercise, and cognitive-behavioural therapy are recommended as the first-line treatment option for people living with overweight or obesity to achieve clinically important weight loss and reduce obesity-related symptoms.19 Other treatment options such as pharmacotherapy and bariatric surgery should not be considered until behavioural interventions have been unsuccessful.19

The ACTION (Awareness, Care and Treatment of Obesity MaNagement) Study is the first Canada-wide study that investigated the perceptions, attitudes, and perceived barriers to obesity management among Canadian people living with obesity (PwO), healthcare professionals (HCPs), and employers. The study was conducted through an online survey between August and October of 2017. The findings of this study highlight the misunderstanding and communication gaps that exist between these groups.44

The majority of the 2545 survey respondents* agreed with the statement that “obesity is a chronic medical condition”.44

74% of PwO reported that they believe obesity has a large impact on overall health.

81% of PwO agreed that it would be beneficial to their health to lose 5–10% of their body weight.

Selected outcomes of the ACTION Study can be grouped into the following topics:44

The most highly utilized methods for weight loss reported by PwO were:44*

Guidelines suggest that some PwO may face challenges that can prevent them from maintaining weight loss achieved through diet and exercise.19

* These methods were reported by PwO who made at least one serious weight loss effort (n=1577) and percentages listed represent the proportion of respondents who found the method successful based on their personal criteria.

The results of the ACTION Study indicated that most people living with obesity (74%) considered weight loss to be completely their own responsibility. 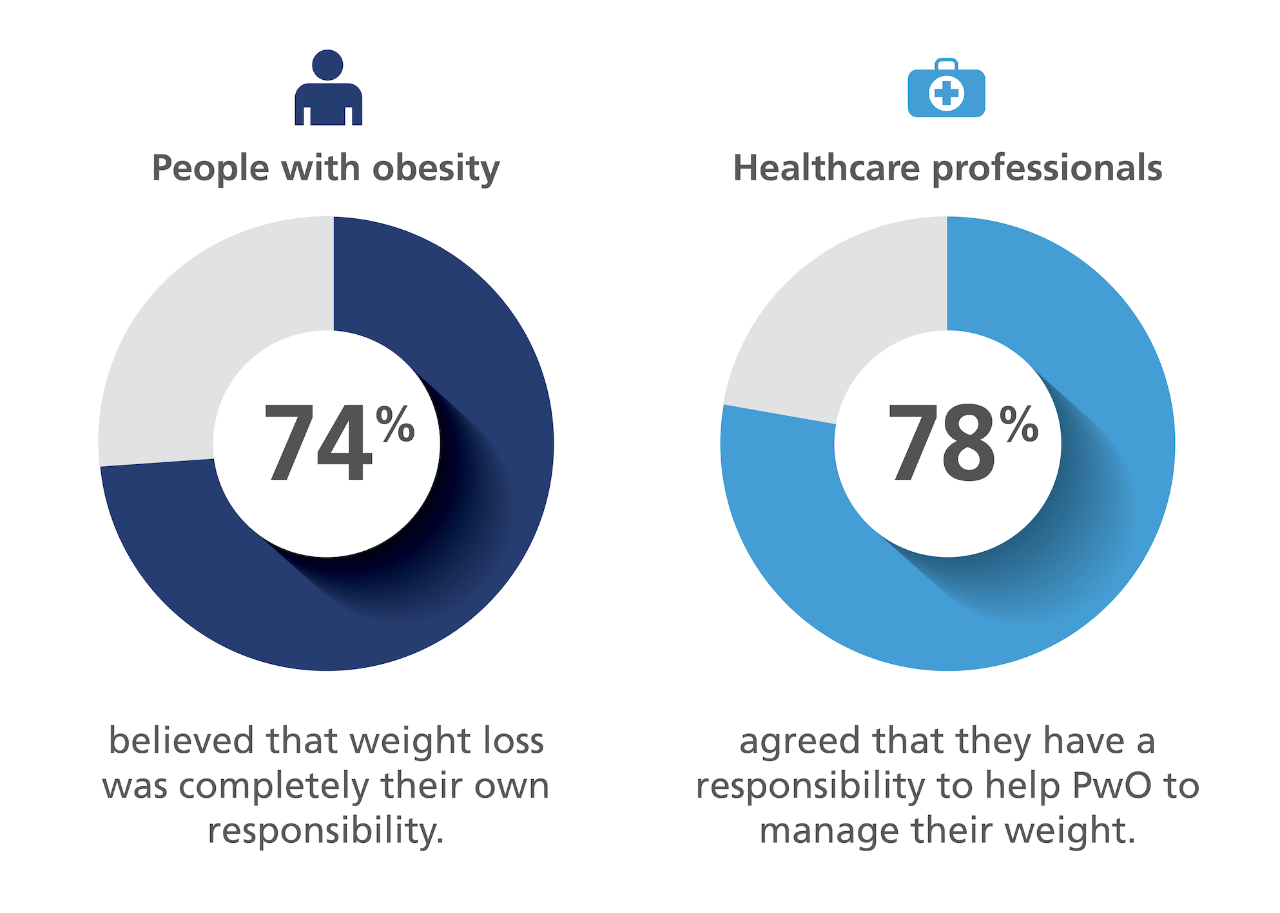 These findings are aligned with the Canadian Obesity Guidelines which identify that PwO may be reluctant to seek medical attention, which may pose a barrier to adequate obesity management.19

Many PwO (52%) indicated that they had not received a formal diagnosis of obesity.44

Although 72% of HCPs reported discussing weight with their patients who are in need of weight management, only 54% of PwO reported that they have had such discussions in the previous 5 years. 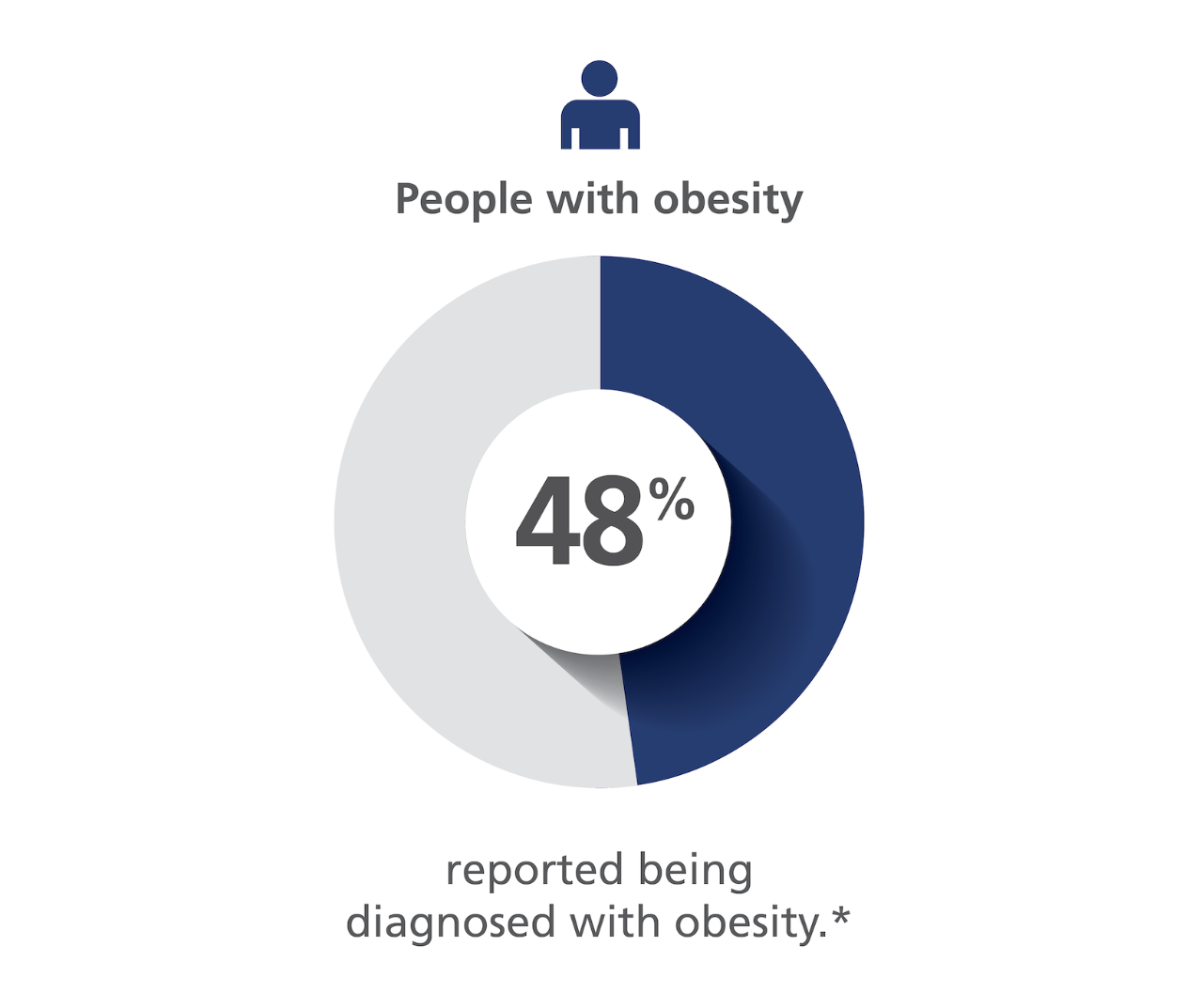 * Among those 54% who reported having a discussion about weight with their HCP in the past 5 years.

The Canadian Obesity Guidelines recognizes that inadequate education and the lack of training programs available for physicians act as barriers to the medical management of obesity.19 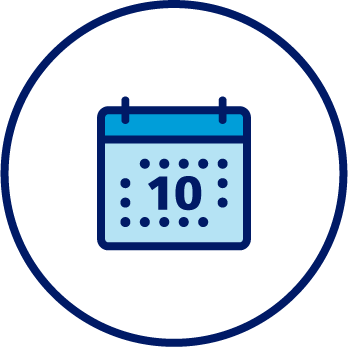 A delay of more than 10 years was reported from the time that PwO first started struggling with excess weight to the time they first discussed weight with their HCP. 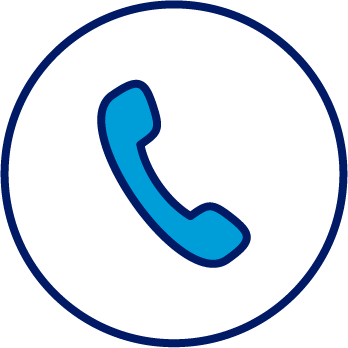 Only 28% of PwO who reported having a discussion about weight with their HCP said that a weight-related follow-up appointment or call was scheduled. 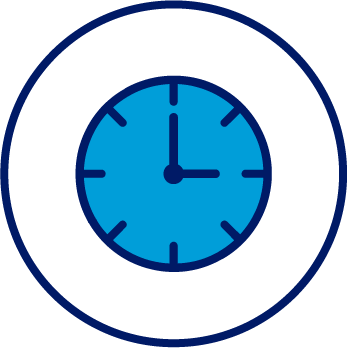 PwO who reported success in losing weight engaged in discussions with their HCPs earlier than those who had no current weight loss success (median: 5 vs. 12 years).

A lack of dialogue about weight management between PwO and HCPs, and few follow-up appointments may present a challenge to obesity management.

PwO and employers had differing perceptions of the benefit of employer wellness offerings.44

49% of employers believe that wellness programs contribute “significantly” or “a lot” to successful weight loss, whereas only 12% of PwO agreed with these statements.

Perceived reasons for non-participation in employer wellness programs differed between employers and PwO:

Skewed perceptions of the value of wellness programs may present a challenge to effective obesity management.

How can obesity be treated?

Obesity should be treated and managed holistically and as a serious chronic disease.9,45

For obesity, this should include diet, exercise, and behavioural modification.43 Healthy eating, physical activity, and cognitive behaviour therapy should be first-line interventions in all individuals with a BMI ≥25 kg/m2 and they must be part of any weight loss intervention.19 However, behavioural interventions may not always be sufficient to maintain weight loss and some people living with obesity may require a combination of treatments that includes pharmacotherapy and/or bariatric surgery to help manage their weight.43

For obesity, pharmacotherapy can be considered if lifestyle interventions do not provide sufficient clinical benefit for individuals with a BMI of ≥30 kg/m2, or ≥27 kg/m2 with other comorbidities.19 Pharmacotherapy should be used as an adjunct to lifestyle modifications and considered if a patient has not lost 0.5 kg (1 lb) per week by 3–6 months after lifestyle changes.19

Is the third-line intervention for obesity management, which is recommended in individuals with a BMI ≥40 kg/m2, or ≥35 kg/m2 with comorbidities.19 Bariatric surgery can be malabsorptive or restrictive and requires lifelong medical monitoring.19,46

Clinical management of adults who are living with overweight or obesity: Canadian Clinical Practice Guidelines 2006.19

Guidelines for comprehensive medical care of patients with obesity and overweight according to BMI stage.

‡ Adjunct to lifestyle modification; consider if patient has not lost 0.5 kg (1 lb) per week by 3–6 months after lifestyle changes.